Flying During COVID: Sue Glover’s take on what it’s like flying today.

Wondering whether it’s like to fly right now? Whether you are up for it?  Here’s my experience on my recent flights so you know what you may face.

I recently flew from Chicago O’Hare (i.e. a HUGE airport) to a midsize airport on United Airlines and then returned to Chicago Midway on Southwest Airlines.  The experiences on these two airlines were drastically different, and not necessarily in a good way for one of these airlines.  Here are a few thoughts based on my experience:

1. Be flexible and prepared for flight changes.

My flights were originally booked pre-COVID in February on Southwest Airlines.  Between April and June, the flights were cancelled and/or changed five times.  The closest change to the actual flight took place 8 hours prior to the flight with an email from United stating that they were changing aircraft and that the flight would now be completely full. Other changes included adding a layover to an existing non-stop flight; changing the flight time by a whole day; and cancelling the flight altogether.  The vast majority of these changes took place in the 3 weeks prior to flying.

2. Be prepared for little to no service on the flight itself.

Southwest Airlines handled inflight service much better than United Airlines in my opinion.  When boarding, flyers were offered disinfectant wipes if they did not have their own.  Water and a snack were offered on the flight. Garbage pickup took place more often that a preCOVID flight. Flight attendants also discussed their safety and cleaning procedures onboard.

United Airlines offered no service but one garbage pick-up service.  No beverages or snacks were offered, nor were disinfectant wipes.

3.   Be prepared for limited food and beverage options in the airport.

The three airports I travelled through, Chicago O’Hare, Charleston and Chicago Midway, had very few opportunities to purchase food or drinks. The vast majority of restaurants, sundry stores and snack bars were closed.

4. Do not assume your flight, or the airport. will be empty.

Both United and American Airlines have stated they allow their flights to be fully booked.  Southwest and Delta have stated that they will maintain their limited booking policies. Keep this in mind when deciding who to fly with and your comfort level in flying on full flight.  Airports are getting busier too. Both O’Hare and Charleston were relatively empty, However, Midway was bustling and appeared to have normal pre-COVID number of people walking around at 11:00 am on a Wednesday.

5. Masks must be worn and can be hot. Bring extras if you can.

All airlines are mandating masks to be worn on-board.  All airports require wearing masks inside the airport.  Bring an extra mask or two that you can change out, especially on longer flights. If they are cloth masks, you’ll be glad to be able to wash out your mask once you arrive.

Overall, the flying experience definitely had its ups and downs, but as we return to a “new normal” at least for now, the steps taken by some airlines, over others, were certainly appreciated and apparent when comparing the two experiences.

Did you hear the news? Susan Glover of Favorite Place Travel is now a certified Charleston Vacation Specialist!

Think your kids are too young for Europe? Think again…

For those of you who know me personnally, you know that I am NOT a fan of staying home, or have some have so lovingly stated, I have “ants in my pants”. For years BC (before children) I (and then my husband and I) travelled often both in the US and throughout Europe.  Once the kids came along, I thought my days of travelling, especially to Europe, were over for a long time. Thankfully that was not the case.  A little planning can make travelling to Europe with kids of all ages can be as great as travelling without them.

So how do you do it? Here’s a few tips that can help you have an enjoyable trip with kids of any age.

What about a tour or cruise? Gone are the days when tours were only for old people or school groups following sweaty tour guides holding big flags with hordes of tired travelers behind them.  Today, many small-group, family oriented tours offer a great way to see Europe without having to worry about logistics.  Picking your location is as hard as it gets and the tour guides do the rest.  Travelling with family focused tours like Adventures by Disney or Tauck Bridges not only give you easy access to highlights of the top spots, but can, in many cases, give you unparalleled access that you just can’t get travelling on your own.  On a recent Adventures by Disney Viva Italia itinerary, stops not only hit Italian highlights like the Spanish Steps and the Vatican, but arranged for a private Sistine Chapel visit with only members of the tour (think 40 people instead of 1500).  Other irreplaceable highlights included an unscheduled stop at the American Cemetery outside Florence just as it was closing for the day.  Members of the tour then got to participate first-hand in the flag lowering ceremony and hear the cemetery manager describe the battles that led to Tuscany being freed from the Fascists.

Family tours also offer the opportunity for some couple time with organized “kids nights” where kids get some time away from their parents while parents get a few hours to themselves for dinner or a wine tasting.

Pasta making is fun for everyone!

An organized tour does still require stops at various hotels. If the thought of packing and unpacking three or four times per trip is not for you, a European cruise may be the lowest maintenance form of family travel.  Several cruise lines of various price points, including Disney Cruise Line, Norwegian, and Princess, offer ocean-based cruises which skirt the entire European continent on different itineraries throughout the warmer months.  River cruises, such as Amawaterways, Viking or Avalon, allow families to experience Europe from its rivers making it easier to visit major cities without long bus rides from ocean cruise ports.    Adventures by Disney has even partnered with Amawaterways to create family-focused Danube River cruise itineraries.  These cruises allow you to traverse the Mediterranean, experience the Norwegian fjords and bike through Amsterdam while only unpacking once per cruise.

3.) Relax and go with it.  Travelling with kids can be unpredictable. Ice cream stops are a must and some museums or highlights will be missed, but so what? Will your 7-year-old remember the Louvre? Probably not. Will your 7-year-old remember splashing around in the fountain outside the Louvre? That’s more likely; and it’s certain that you will never forget it.  Kids have a way of making the most curmudgeonly hotel employee smile and offer you an excuse for ordering that dessert or riding the carousel.

4.) Let someone else do the work.  Use a travel agent!  Yes, you can spend countless hours researching the best price on that hotel or trying to figure out the best way to get from one location to the other, but why?  Your efforts are best spent enjoying the time with your family, not figuring out what to do now that the French rail employees have declared a strike (and they will, especially on Fridays in the Summer!)

As Helen Keller said, “Life is either a daring adventure or nothing.” Travelling with your kids, either near or far, will instill in them a sense of adventure that no other experience can replicate. Let us help you give this gift to your children. Contact your Favorite Place Travel specialist today to get you and your family on the road. 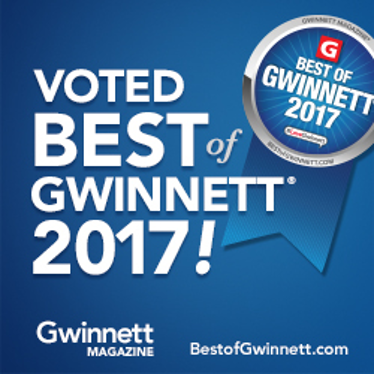 We are proud to announce that Favorite Place Travel has been voted Best Travel Agency in Gwinnett County, one of America’s fastest-growing counties for the past 20 years.

Call your Favorite Place Travel agent to book your vacations!