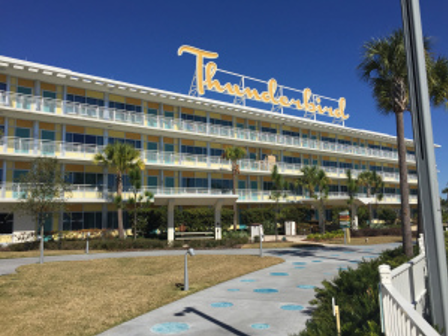 I admit it. I felt like a traitor. I was raised as a Disney fan in a family that is slightly Disney crazy. But then my daughter became a Harry Potter fan and I knew a trip to Universal Studios Orlando was in our future. We finally made it recently and it was well worth it.

We stayed on property during our visit which is highly recommended. Like Disney, guests staying at the Universal resorts get into one of the Harry Potter sections an hour earlier than everyone else. If you are visiting during a busy time it’s worth getting out of bed a bit earlier to avoid some of the worst of the lines. Universal has four resorts currently open, Cabana Bay, Royal Pacific, Portofino Bay and the Hard Rock Hotel. A 5th hotel, Sapphire Falls, opens later this year.

Of these hotels, all but Cabana Bay, the value resort,  and the new Sapphire Falls include the Express Pass feature (more on that later).

Two different Harry Potter “lands” are incorporated into the two theme parks. In Universal Studios, Diagon Alley, the London base for the books’ wizards, is a fully immersive experience that goes beyond the typical ride based attractions to incorporate restaurants, shops, shows and, of course, butterbeer. Diagon Alley’s main ride, Escape from Gringotts, takes riders into the wizard bank, complete with the trolls who run it,

and on a high-speed race to get Harry, Ron and Hermione away from Voldemort. When you’ve had your fill of Diagon Alley, be sure to take the Hogwarts Express train to Islands of Adventure. On the train, you will ride with Harry, Ron and Hermione to Hogwarts but watch out for Dementors! The ride is different each way, so make sure to ride it both to and from Universal Studios. You can only ride Hogwarts Express if you have a park-to- park pass though.

In Islands of Adventure, the second Universal park, visitors find Hogsmeade, the town where the wizarding school Hogwarts is located. There you can journey through Hogwarts and compete in a match of quidditch, the wizard game. The ride’s line winds through Hogwarts itself going through the dining hall, green house and even Dumbledore’s office. Warning: the ride is intense, I mean very intense, so if you are prone to motion sickness think twice. Dueling Dragons, a family coaster, is a tamer, less intense ride in Hogsmeade. Both Diagon Alley and Hogsmeade have a location for Olivanders, a shop where you can purchase your own magical wands. At Ollivander’s, you can go through a wand selection process and one person out of every group gets to have their wand selected by the wand itself. It’s a fun process but can have a long line for the show. Visit the Diagon Alley location where the line is typically shorter than the Hogsmeade location.

If Harry Potter isn’t your thing, maybe the Minions, Shrek, Transformers or the Simpsons are. Each of these favorites has one or more interactive rides or experiences. Minion Mayhem in particular is sure to please everyone in the group. Over at Islands of Adventure, your family’s favorite superheroes and the dinosaurs of Jurassic Park find their home. The youngest (and shortest) members of your party will love the Pteranadon Flyers were they can hang glide through the treetops, but be sure to get there early as the lines can get long. A revamped Hulk coaster comes to Island of Adventures this Summer.

Which brings me to the lines. One thing that Universal is really lacking, in my opinion, is crowd management and how it handles wait times. Universal offers the option for the Express Pass in its attempt to manage its crowds. It works in a similar manner to Disney’s Fast Pass, letting you go through a shorter line than the regular queue. However, there are two HUGE differences between the Express Pass and Disney’s Fast Pass. The first is that you have to pay for it, and it’s expensive (almost as much as the cost of the ticket). If you stay at one of Universal’s premier or preferred resorts, the pass is included in the hotel rate. The second biggest difference from the Fast Pass is that it doesn’t work on the most popular rides. While we were visiting the wait times for both the Gringotts ride and Hogwarts ride were over 90 minutes, yet the Express Pass wasn’t valid on it. This is why the Early Admission benefit offered by all of the Universal resorts is so valuable. Visit these popular Harry Potter rides before the parks fill with people and then spend the rest of your day on the other rides with Express Pass and enjoying the shops and restaurants.

Overall, Universal Studios Orlando will definitely appeal to the movie lovers in your family. For a Harry Potter fan, it’s an absolute must do.